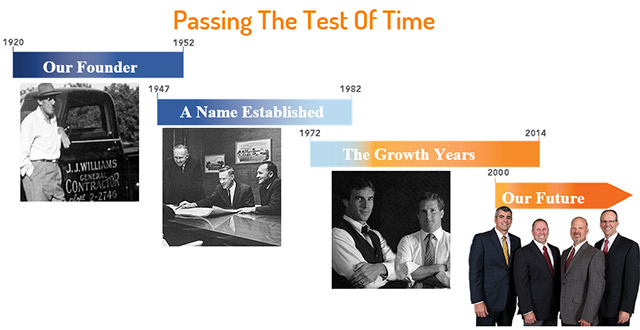 The year was 1920 and JJ Williams decided that farming in Georgia was not his future. There was a land boom in Florida so JJ Williams and his wife Lulabelle moved to the sleepy citrus town of Orlando to build houses. Business was brisk and JJ established himself as a quality builder that focused on pleasing his clients. As the Great Depression gripped America, JJ was able to survive on small renovations through the 1930’s.

After WWII, JJ’s sons Ralph and Randall joined the business as another housing boom swept Florida. A Williams built house in the 1950’s meant quality and innovation. In the 1960’s the company began commercial projects and soon were self-perfoming much of the concrete and carpentry work on their projects. Ralph and Randall had learned from JJ the importance of outstanding service to their clients. Repeat business became the norm for the Williams family business.

Grandsons, Bruce and Alan, entered the business in the 1970’s, both graduates of the University of Florida. Bruce, like his father, was in charge of the office, leading the project managers, and business development. Alan followed his father Randall by running the field operation. The 70’s and 80’s were growth years and the company excelled in tilt-up warehouses, school projects, churches, and retail centers. In the 80’s and 90’s the company began to travel across the Southeast with major retailers Home Depot, Target, and Circuit City. The company earned a local and regional reputation for excellence, always striving to serve their clients better than other contractors.

As Bruce and Alan transitioned out of the company in the late 2000’s, an ESOP was formed so that each and every Williams Company team member would own company stock. As an owner, every Williams employee understands the goal of providing a much higher level of service to our clients. Leading this focus on client service are our CEO Bob Lipscomb, Senior VP and COO Chris Rollins, CFO Roger Whitty, and President Taylor Huddleston. This leadership team brings 83 years of combined Williams Company tenure, and provides tremendous energy, experience, and expertise to our clients. With an excellent team of construction professionals, the future looks bright for Williams Company.